Roshelle Fong is a Chinese-Australian, Melbourne-based multidisciplinary artist who creates participatory experiences around cultural confusion, human connection and technology as a life-force. She has produced and performed work in a wide range of spoken word, stand-up comedy, theatre and performance art contexts, including at RAW Comedy Festival, Auckland Fringe Festival, Melbourne Fringe Festival, Midsumma Festival, Emerging Writers Festival and at the Sydney Opera House. Last week she hosted an event in Seydisfjordur, as a part of the HEIMA artist residency. Below we learn all about the food delivery theater show.

Earlier this year, Roshelle won the Multicultural Arts Victoria Award for Innovation in Cultural Practice at Melbourne Fringe Festival 2018 for her work nomnomnom and has since adapted the show in Seydisfjordur, Austurland, as part of HEIMA artist residency. In 2019 she will adapt nomnomnom in Sydney at Bakehouse Theatre and in Shanghai with Untitled Space Gallery. She will also curate a larger scale version of the show as a four-day long installation at Testing Grounds in Melbourne, funded by the City of Melbourne and the Australia Council for the Arts.

How do you feel isolation is different in Austurland (East Iceland) to other areas where you have been?

„The community spirit I’ve experienced in Austurland has been mind blowing! In Seydisfjordur there’s such a jam-packed creative social calendar full of charitable events, workshops, experimental art and everything in-between, and residents really seem to look out for each other. I’ve mainly lived in big cities like Sydney and Melbourne where it’s fairly easy for people to fall between the cracks and become socially isolated, especially without close friends and family around. It’s also not uncommon to feel the pressure to be independent and make one’s own way, which can come with shame since often you have to reach out for support.

It has opened my eyes and heart spending time in this remote fjord where co-dependence seems commonly accepted as a tool for survival rather than a sign of weakness. Whether you’re chatting to a neighbour in the supermarket, lending them matches or offering them a lift into town, giving back and staying connected is everybody’s business. Witnessing these everyday prevention measures for social isolation has been very special.“

„The show nomnomnom in which audiences roleplay as prospective food deliverers in a job trial, is part of my current enquiry into how immersive theatre and performance art may remind people of their potential to influence social change and forge powerful connections in their communities. Put into situations where they may connect with and support total strangers without imparting judgement, audiences engage in a performative exercise in compassion. It is my hope that after the show they are compelled to reimagine the significance of their daily actions.“

And what do you feel after doing this project ?

„This has been a truly magical experience, and I’m missing the cast already! Most elements of the project have been very social for me, including door-knocking during casting, borrowing props from people in town and rehearsing and bouncing ideas around with actors. Throughout the entire process, the generosity and openness that my collaborators have shown me has been deeply touching and it’s been wild to see nomnomnom translate in a meaningful way across the other side of the world.  Melbourne, where I staged the show in September, is vastly different to Seydisfjordur in many ways, but the show’s exploration of intergenerational connections has felt just as relevant here. I’m really excited to continue adapting the show around the world in 2019 and build on this immersive portrait of human connection.“

Can you describe Seydisfjordur and the people you have worked with ?

„Seydisfjordur is just breathtaking. I used to have a storybook about an enigmatic little girl who lived in a chocolate box house in the mountains with a yellow window – this town reminds of those illustrations, exuding a calmness and a very grounded kind of stoicism.

There were so many bizarre coincidences and serendipitous moments that led me to finding my team of creatives, who are some of the kindest, most resilient and creative people I’ve ever met. I had the pleasure of working with both locals and students at the LungA School, and the mixture of energy, ideas and enthusiasm they all brought was incredible. I met Lilja, who played her namesake in the show, at a writing workshop run by the town’s librarian Nanna, also in the show, and we pretty much hit it off straight away.

The chats, laughs and little adventures we’ve shared have really made my trip and her drive and creativity will inspire me for years to come. As soon as I met up with LungA School student Steinar, who plays nomnomnom team leader Tryggvi, I knew he was the man for the job. I haven’t met anyone with quite as much pizazz, let alone the astonishing ability to wear shorts and a t-shirt in sub-zero temperatures! The staff at Skaftfell Bistro, Jim and Ludvik, were great at improvising and blurring the lines between performance and reality and Illugi who played Gunnar channeled some pretty terrifying customer dissatisfaction which was amazing to watch. Nanna was an absolute knock-out playing Hel, Goddess of Death, and the choir consisting of LungA students Fanny and Hildur and my fellow HEIMA resident Tora was hauntingly beautiful singing Bium Bium Bambalo. Everybody gave 110% to their roles and I couldn’t have been happier with the audience feedback we’ve gotten, which has been very touching.“

How do you feel darkness affects creativity ?

„The days of darkness have been truly paradoxical, with time both crawling and flashing by! While I knew about the dark days before coming to Austurland, nothing could have prepared me for its effects, including a mixed up sleep cycle and feeling the pressure to fit as many tasks as possible into few sunlit hours. It seems the dark has contributed to my darkening the symbols and mise-en-scene of the show rather significantly. At the same time, because producing the show involved working in a team, the creative process became my saviour through the darkness. Our rehearsal schedule forced me to get out of the house, socialise and not dwell on the lack of sun so much, which I’m grateful for. At home I do tend to work best at night while everyone is asleep so I also came to embrace the long evenings. Spending time in the HEIMA workshop building set pieces and making costumes into the wee hours was a very rewarding experience for me.

Roshelle met with the former mayor of Seydisfjordur, Þorvaldur Jóhannssonn, to donate the ticket proceeds from the show to Hollvinasamtök Seydisfirdi. 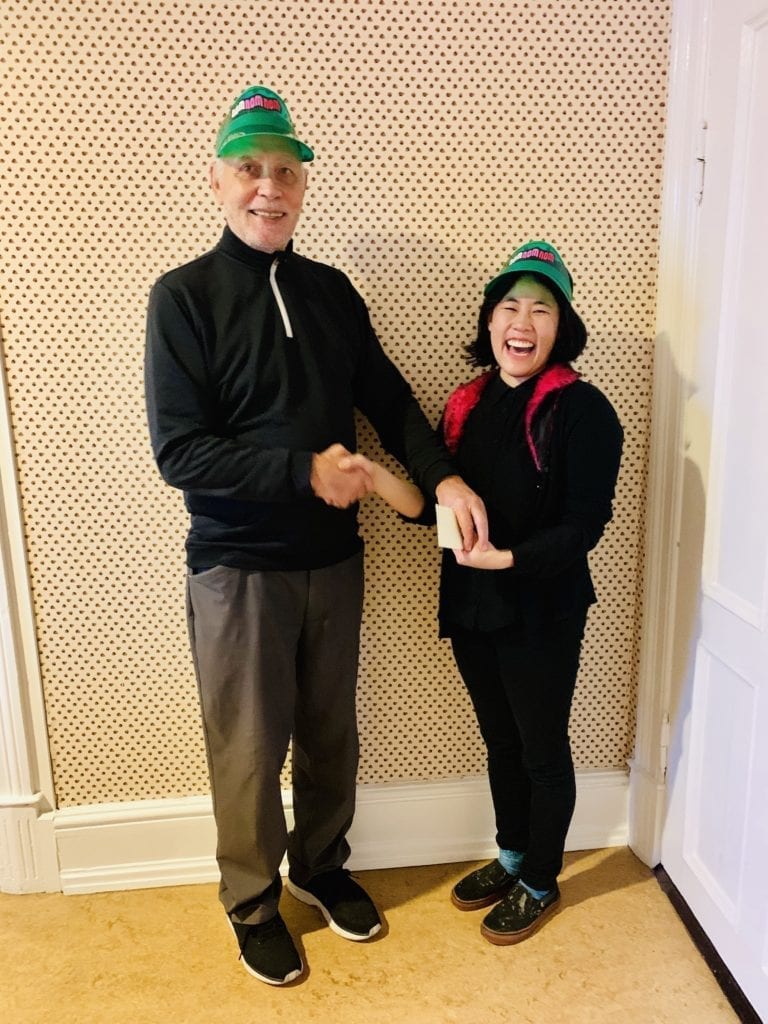